The weather has finally gotten warm enough for the splash park to open! So Little Bit and I ventured out to have a little fun at the park.

I think this was his favorite… Water cannons! 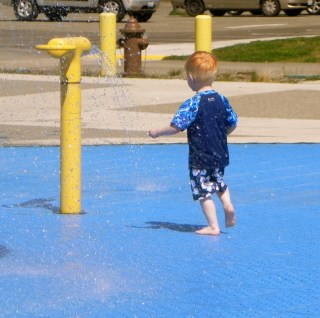 He had a billant time and even figured out how to turn on the water by touching the buttons on the red posts.

We’ll be going back frequently during the summer.  It’s probably going to be his favorite summer place.  I don’t mind, especially since it is free!

Don’t worry, this little ginger had plenty of sunscreen on, as did I. We’re both fish belly white and burn in a second. :(  He did refuse to wear his sun hat though… first time for everything I suppose.

This entry was posted in Little Bit, Outings, Washington. Bookmark the permalink.