A Sleeping Bag for Doggie

My 3 year old looked up at me on Christmas Eve and said, “Mama, would you make Doggie a present?”  How could I refuse such a request.  Doggie, you see, is the most beloved of all Bennett’s stuffed animals and he really isn’t a dog… more of a Giraffosaurus. 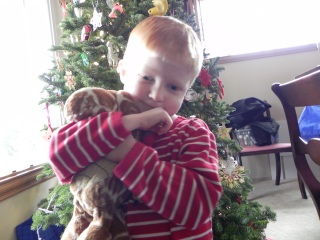 So after he went to bed I stayed up and made doll sized sleeping bag for Doggie.

I made it a little bit wider than I probably would have, had it been for a regular animal.  Doggie has rather large feet and I wanted to make sure it would be big enough.

All of the materials I had on hand.  It was late on Christmas Eve and there would be no running out to get anything.

I had more of this Alexander Henry 2-D Zoo fabric sitting around.  I had plenty of left over bias tape that I’d made from the dot fabric, so that went into the mix. 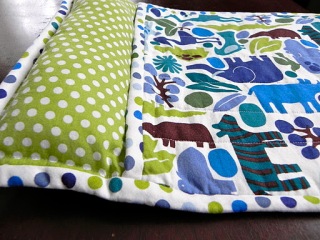 The M’liss green fabric with white dots didn’t match exactly, but it was close enough.  I used it on the back side as well.

And I always have a bag of poly fill around, so into the sleeping bag it went for Doggie’s pillow.

Bennett was thrilled with Doggie’s present and apparently so was Doggie. 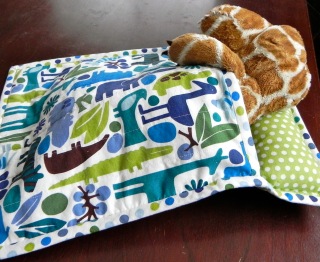 1 Response to A Sleeping Bag for Doggie