I made two frogs this week from Funky Friends Factory pattern.

The first one was made of some super soft minty green cashmere sweater bits that I have left over from making some upcycled baby hats.  I had to size the pattern down just a hair to make it small enough to fit the material that I had left. I used some little scraps of white cashmere with safety doll eyes to make his eyes.

The result was Mr. Ribbit! He’s super sweet and cuddly!

The second frog I made is two shades of bright orange. I had some left over fleece from making a friend’s son a snake last year and wanted to use it up.  I’m normally not drawn to use orange by choice, so I took the inspiration and ran with it. 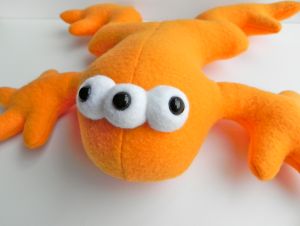 I was very happy to use up a color that I don’t use very often and some left over from another project!  Yea for stash busting. :)

1 Response to Getting Froggy